The events industry is taking a huge knock now. All the media can do is look on to the companies, who have tried to keep their businesses afloat – whilst everyone stays at home. Keeping safe and awaiting for a time when things can go back to “normal”. Events from small weddings to huge music festivals and everything in between. Are having to cancel as life as we used to know it, is on hold. 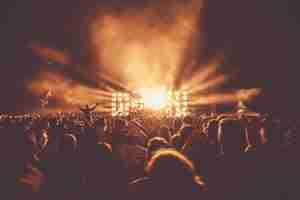 Image by Pexels from Pixabay

The barometer for the festival circuit is the world-famous Glastonbury Festival. Celebrating its 40th year anniversary in 2019, we do not think even the Eaves family would have contemplated having to cancel two years in a row. Having had a good consecutive run of successful festivals, since 2007. (there was a year out in 2012 due to the Olympics and the limited number of portable events toilets in the country).

In 2020 some festivals did manage to go ahead, but from an outside perspective, the atmosphere appeared rather sterile. With people attending herded (albeit in a civilised manner) and kept in pens to enjoy a socially distanced event. This is a far cry from the sometimes-unadulterated reckless abandonment that is the promise of many a festival and the experience sought by may a festival goer.

Aside form the enjoyment of the festival experience. The whole festival event is underpinned by an army of workers, both on site and off site to enable that reckless abandonment. Sound and Lighting engineers, riggers, catering staff, security, equipment providers (fencing, cabins, event equipment), the local hoteliers, transport companies and not to mention the artist. All rely on the festival ecosystem. At the time of writing many of the individuals who would normally draw a wage from the festival circuit are relying on government financial support if they can access it.

What are the knock on effects to the events season?

Companies that provide specialist services to the festival industry are having to diversify and find an alternative form of income to keep their doors open. Marquee specialist are providing their equipment for testing stations and educational establishments to assist in social distancing and the like. Small companies are just going out of business.

As with every age that we live through. There will always be a need for us to dive into our primeval lust for reckless abandonment. Our drive for group enjoyment of bands and artists, to spend an hour or two moved by legends such as Paul McCartney, the Manic Street Preachers, Genesis, Dianna Ross, Dua Lipa, The Spice Girls, Elbow, Level 42, Sting, Blur and The Pussycat Dolls. Yes – this was the proposed line up for 2021 at Glastonbury. And what a line up this promised to be, sadly after the announcement that Glastonbury is cancelled – we will probably never get to see this amazing line up together.

Modern Glasto’ is was not always this way. It started out a humble series of concerts, lectures and recitals called the Glastonbury Festivals between 2014 and 1926. It was not until 1970 when the Pilton Pop, Blues & Folk Festival was attended by 1,500 people. Back then the cost of a Glastonbury ticket was £1.00…last years cancelled festival had a face value of £265. At just over £50 a day for all that unadulterated bohemian recklessness. We would say it is worth it!

The demand for fine music and fine British Country air will drive us out into the heady altruistic warmth of a mud laden Somerset field again once more. Until then low key socially distanced events will return. As safety returns to social gatherings, expect to be in those queues for the portable toilets, wading knee deep through fields of to and back from the festival stages to your disposable tent. When the beer will not be cold, the music will be cool, the vibes just right, the company close, and the sleep will be at best, interrupted.

Those days will return