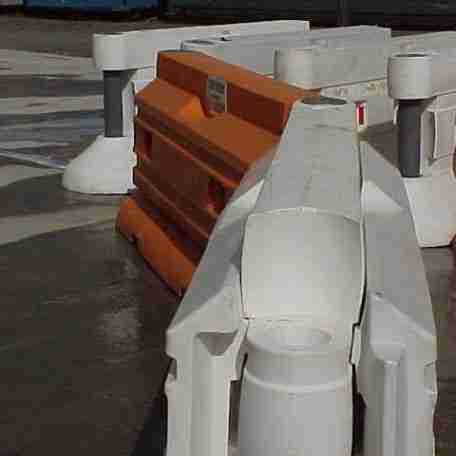 If you are looking to install a water filled barrier where safety is paramount – for example on a major road or highway – we highly recommend opting for Rhino Restraint Barriers.

A rotationally moulded heavy duty polythene water filled barrier system, the Rhino barrier has been successfully tested under criteria set out in BS/EN1317 – N1 to contain a 1500 kg saloon car travelling at speeds of 50 mph to gain the approval of the Highways Agency of the USA and here in the UK, and the National Road Authority in Ireland. In addition, Rhino barriers are MIRA wind speed tested and have been accepted for use at all BAA Airports. When used as part of a traffic management system during road works and around building works, the Rhino barrier system provides reassurance to both drivers and pedestrians. An easily managed and adaptable restraint system, Rhino barriers are connected using a pin drop system for quick assembly. As soon as the first Rhino barrier is in place water filling can commence allowing for extremely fast installation. A free standing water filled barrier system, Rhino barriers have high visibility both day and night. Creatively designed, the main body of the barrier is protected by foam filled impact strips which can be replaced individually should they become damaged on impact without having to replace the main body of the barrier. Rhino barriers continue to be used at numerous events from music festivals to sporting events including motor races. The rhino barrier can be individualised to suit your needs with the addition of mesh fence panels, hoarding panels for additional protection and signage, or warning lights. Each rhino barrier has 2 metre ground coverage, height of 0.88m and base width of 0.65m. The Rhino restraint barrier weighs just 170 kg when empty, increasing to 530 kg when filled with water.

Why don’t we display prices?

We don’t show prices on the website as we prefer to quote on an individual basis to make sure your quote is fully tailored to your complete hire needs.

For tools and equipment secured from third parties prices change often so just call us on 0844 288 7265 for availability and to get the best rates on the day!

Whether you are looking for a single skip or a complete site hire, we can find the right deal for you and the best prices for your area.