Modern machinery as we know it has come a long way. Necessity being the mother of invention has enabled the ability for the completion of bigger civil engineering projects. From the construction of canals, roads, through to railways and modern motorways, the need to deliver projects on time and on budget has driven change. The nation’s infrastructure bears testament to the numerous changes in civil engineering and how mechanisation has improved projects. 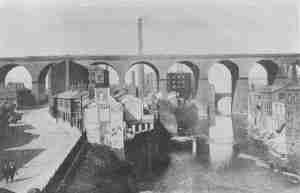 It is hard to think that the construction of Egypt’s pyramids occurred about four thousand years ago, yet it was only in the past 200 years that mechanisation and hydraulics could have such an impact on such large projects. Up until recently gangs of labourers or navvies were the power behind big projects. Look at our Victorian landmarks and civil structures to understand that a lot of people were employed in their construction, building bridges, digging tunnels, spanning valleys, digging ports and putting the Great into our industrialised nation. Classic structures such as the Stockport Viaduct (One of the worlds biggest brick structures 1840), London Underground 1860, Forth Road Bridge 1890 to the Nations Great Railway stations relied heavily on the use of human labour to complete. It seems necessity has gathered pace in the past three hundred years. The pinnacle of which has been the era leading to and including the industrial revolution. We needed to get around and move products and goods from one place to another.

One such project was designed to provide a direct link between the canals of England to the Port of Liverpool was the a 36-mile-inland waterway. The existing waterway, the 100 plus year old Mersey and Irwell Navigation was decrepit and in some places non-navigable. A better solution was needed and at the time of the long depression, things were not looking too hot for the North-West UK. In a bid to resurrect the economy many local manufacturers and persons of influence came about with a plan to build the ship canal to make the link between the Port of Liverpool and a central hub of waterways in Manchester more direct. The Manchester Ship Canal was born – to drive the Northern Powerhouse.

Costing about £1.7 Billion in today’s money, the Manchester Ship Canal is only just shorter than the Panama Canal and is the world’s eighth-longest ship canal. Construction was achieved by around 12,000 workers and this peaked to 17,000. Each navvy would get about £16 per day in today’s money for a 10-hour day. The plant inventory included 180 Steam Locomotives, 124 steam-powered cranes, 192 steam engines and 97 steam excavators. The Manchester Ship canal took 6 years to complete and was open on the 1st of January 1894 (just as the long depression was coming to an end) and it continues to carry millions of tonnes of cargo per annum.

Averaging 6 miles per year in construction speed, the Manchester Ship Canal clearly benefited from the excavator and plant technology of the day. In comparison to other projects the workforce was more efficient and there were minimal deaths. With modern management techniques measuring productivity in shovels, it was not going to be long before mechanised plant made the navvies redundant.

Steam excavators were the forefathers of modern plant technology. Relying 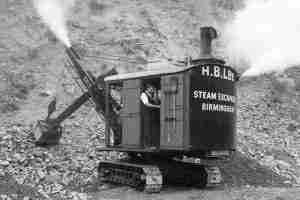 on ropes and pulleys to operate they were cumbersome and subject to intermittent maintenance. Improvements continued until the 1960’s however the provision of movement and power would have remained as a tether / lever and pulley system. In the late nineteenth century there were some hydraulic excavators available however they were a far cry from modern counterparts, using water to deliver power. They certainly did not have the power and reliability of the linear hydraulic motor, the modern staple of plant power.

There are many inventions which could stake a claim to holding the heritage of modern plant machinery. Whether you are using a scissor lift to access height, using a powered boom to stack, transporting rubble in a dumper or loading it with an excavator you have a couple of great Englishmen to thank for not breaking your back. William Armstrong a well-known scientist came up with the hydraulic accumulator this was a tower containing a tank which would supply pressurised water used to power early hydraulic cranes. You could also look at the hydraulic ram invented by John Whitehurst of Cheshire, which would raise water to the height of 16ft using similar process to the hydraulic accumulator. Over decades the technology behind modern plant evolved and now we have the fantastic plant machinery we have available to hire today.

Machinery has certainly come a long way making the world we live in easier to shape.

Learn more about the history of excavators: (http://www.directoryimd.com/article/digging-up-the-past-a-history-of-excavators-part-1.html)