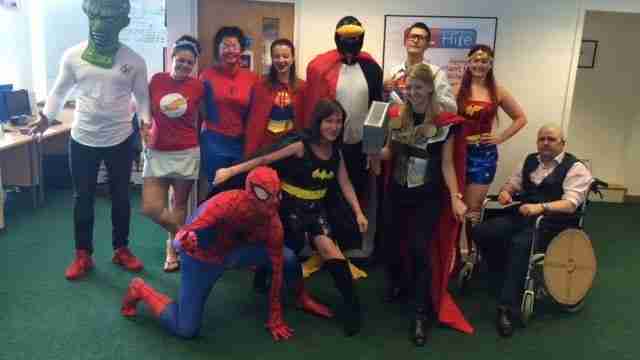 Pal Hire are delighted to have raised £521.22 for the Cash for Kids Superhero Day, with the chosen charity of their choice being the When You Wish Upon a Star charity. We had our very own Spiderman and Spiderwoman, Thor, Batwoman, the Incredible Hulk, Supergirl and a very Angry Bird.

Our staff were doing superhero tasks for each other all day, including tidying desks and making brews in return for a cash donation.

If you happened to see two masked crusaders in the Cheadle branch of Natwest, there wasn’t a robbery taking place. It was two of our superheroes counting the cash.

The superheroes managed to raise £260.61p, which was matched by the company.

Company Director Dan Daintry said, “We are delighted to have raised money for When You Wish upon a Star. The When You Wish Upon a Star charity makes dreams come true for children with life-threatening illnesses, including trips to Lapland to see Father Christmas and CenterParc breaks.