As the UK continues to glow in the warm rays of sunlight it has received over the last few weeks, and is expected to receive over the coming weeks, some parts of the UK are suffering from extremely rare wildfires.

Wildfires generally occur in much hotter countries such as Australia and Portugal, where summer months are dry with minimal amounts of rain, and some of us may not remember the last time there was a wildfire in the UK. 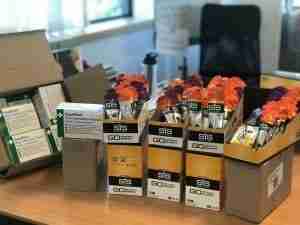 One of the major blazes in the UK is currently raging over Saddleworth Moor, Greater Manchester. The first fire broke out Sunday, June 24, and it is still causing havoc almost 10 days later.

Pal Hire, based in Stockport, Greater Manchester, has spent the last few days gathering supplies including glucose energy sachets and hypoallergenic plasters, to be delivered this week by the company’s directors to Stalybridge Community Fire Station.

Upon finding out about the fire departments needing additional supplies from a source within the fire brigade, company director Dan Daintry was moved by the story and felt his company needed to act. “We understand it’s an unprecedented situation, but if every company did a little bit, the fire departments will get the support they need,” commented Dan when asked for a word on the importance of sending supplies.

As there is no current end in sight to the Saddleworth Moor fires, organisations throughout Greater Manchester must follow Pal Hire’s direction and help the brave men and women of the Greater Manchester fire departments and reserve soldiers who have been brought in to tackle the blaze, some of whom are working over 15 hours a day with no breaks, further increasing the need for supplies.

Pal Hire and its staff have provided supplies to the fire departments and Dan urges the people, and companies, of Greater Manchester to do the same.